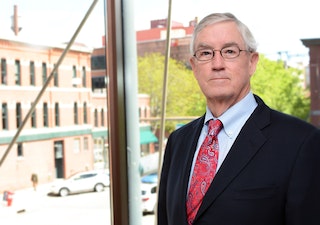 Dick Holme joined Davis Graham & Stubbs LLP in 1966. During his years with the firm, he tried almost 70 jury trials, including those while he was a Deputy District Attorney in Denver, numerous trials to courts, and several arbitrations. He has been a fellow of the American College of Trial Lawyers since 1983 and a member of the Colorado Supreme Court Standing Committee on Civil Rules since 1994.

Mr. Holme earned his J.D. from the University of Colorado School of Law and his B.A. from the Williams College. He is listed in The Best Lawyers in America© in the areas of Appellate Law, Commercial Litigation, and Litigation: First Amendment and has been selected for inclusion in Colorado Super Lawyers by Thomson Reuters.