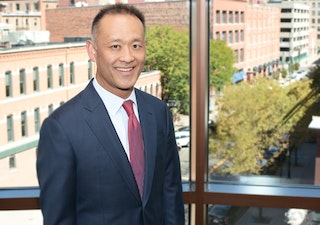 Kenzo Kawanabe is a trial lawyer who represents clients in high-stakes cases relating to commercial disputes, mass torts, construction, products liability, and intellectual property. He represents Fortune 500 companies in a variety of industries, as well as start-ups in the technology industry.

Mr. Kawanabe is a fellow of the American College of Trial Lawyers and has significant litigation experience including:

Mr. Kawanabe served on the DGS Executive Committee, as Pro Bono Partner, and currently Co-Chairs the Diversity, Equity & Inclusion Committee. He teaches at the National Institute for Trial Advocacy and dedicates significant time to volunteer work, including board service for Colorado Legal Services and the Colorado Lawyers Committee.

Mr. Kawanabe is a fourth-generation Coloradan who engages in community service. He served on the board of advisors for the Institute for the Advancement of the American Legal System and as board chair for the Boettcher Foundation. Mr. Kawanabe also is the former board chair of The Denver Foundation, one of the region’s largest community foundations which annually grants tens of millions of dollars to nonprofit organizations. He also served on the boards of the Sakura Foundation, Colorado Nonprofit Development Center, Community Resource Center, Foundation for Sustainable Urban Communities, Barton Institute for Philanthropy and Social Enterprise, and Asian Americans Advancing Justice.

Davis Graham & Stubbs LLP is pleased to announce that the firm has been named the recipient of the 202...