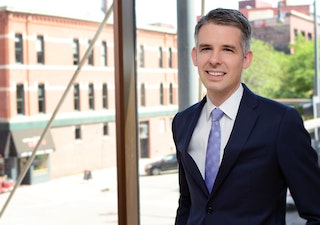 Mark C. Bussey’s practice focuses on mergers and acquisitions, private equity, joint ventures, and financings and securities in a broad range of industries, including energy, mining, financial services, real estate, hospitality, and technology. He also counsels public companies on securities compliance and disclosure obligations, as well as on corporate governance and other general corporate matters. Mr. Bussey joined DGS after practicing for three years in the corporate department of Simpson Thacher & Bartlett LLP in New York.

Mr. Bussey has been recognized as an Emerging Leader by The M&A Advisor.

He has also been named in The Best Lawyers in America by Woodward/White in Mergers and Acquisitions Law.

A significant portion of Mr. Bussey’s practice involves the representation of public and private companies in connection with structuring, negotiating, and documenting mergers, acquisitions, dispositions, carve-outs, recapitalizations, and reorganizations. Mr. Bussey also has extensive experience representing private equity sponsors and other private equity investors in investment transactions and financings, including those in connection with leveraged buyouts and minority investments. His practice in this area includes joint venture work, with an emphasis on structuring joint venture arrangements and negotiating limited liability company operating agreements, partnership agreements, and other forms of joint venture agreements.